Adopt Me! Wiki
Register
Don't have an account?
Sign In
Advertisement
in: Pets, Eggs, Ultra-Rare Pets,
and 2 more

The Red Panda is an ultra-rare pet in Adopt Me!. It can be obtained from any non-limited egg, either from a Cracked Egg for

Here are the tricks a Red Panda learns in order:

In its Neon form, the Red Panda's ears, nose, feet, and the stripes on the tail glow a bright red color.

The Red Panda cycles through the colors of the rainbow in the same areas as its Neon form when made into a Mega Neon. 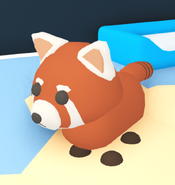 The Red Panda Statue at the Pool Party.
Community content is available under CC-BY-SA unless otherwise noted.
Advertisement