Adopt Me! Wiki
Register
Don't have an account?
Sign In
Advertisement
in: Gifts, Lunar New Year (2020), Bucks,
and 10 more

View source
watch 02:56
Raise a Floppa - The Loop
Do you like this video?
Play Sound
Not to be confused with Monkey Boxes or Bat Box.

The Rat Box is a legendary gift in Adopt Me!. It could be obtained from the Lunar New Year (2020) event. Players either receive a Rat, a rare pet, or a Golden Rat, a legendary pet. There is a 14 out of 15 (roughly 93.33%) chance to get a Rat, and a 1 out of 15 (roughly 6.67%) chance to get a Golden Rat. It could be bought from the Lunar New Year Platform in front of the Playground. The Rat Box only contains these two pets. Players can still open one if they have it, or they can obtain one through trading. It can no longer be bought with bucks as the Lunar New Year (2020) has ended.

The Rat Box is a brown cardboard-looking box with six air holes on its front and back side. It has handles on the top, but players would hold the rat box from the bottom. 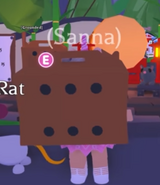 A player holding a Rat Box.
Community content is available under CC-BY-SA unless otherwise noted.
Advertisement