Adopt Me! Wiki
Register
Don't have an account?
Sign In
Advertisement
in: Toys, Rare, Rare Toy,
and 8 more

View source
watch 02:17
New Pokemon Games - The Loop
Do you like this video?
Play Sound
Not to be confused with Clouds & Rainbow Rattle.

N/A
The Rainbow Rattle is a rare toy in Adopt Me! that came out in the Gifts at the end of March 2019, but was only obtainable for a short period of time.

Very few players possess this item, because when Bethink released the rattle, he had forgotten to add a picture for the rattle, so NewFissy quickly removed it from Gifts. This item is now only obtainable through trading.

The Rainbow Rattle features a white rattle topped with a small cloud similar to the Cloud (vehicle), with a rainbow reaching across the top. It is held up by a white stick. When in a player's inventory, the rainbow does not show, looking like a simple cloud with a handle turned slightly to the side. 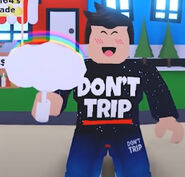 A player holding the Rainbow Rattle. 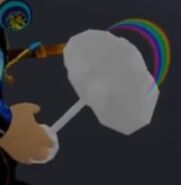