The RGB Phone Throw Toy is a rare toy in Adopt Me!. It was released on January 27, 2022, during the Task Board Update. It can be obtained by opening an RGB Reward Box at a 14.5% chance or through trading.

When thrown with a pet out, the pet will chase it and bring it back to the player. 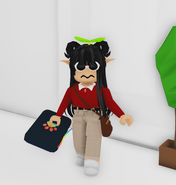