Adopt Me! Wiki
Register
Don't have an account?
Sign In
Advertisement
in: Vehicles, Halloween Event (2019), Legendary Vehicles,
and 10 more

63,000. As its respective event has passed, it is now only obtainable through trading.

As its name suggests, the Pumpkin Carriage features a carriage in the shape of a pumpkin. The undercarriage resembles the stems of a pumpkin, which slightly spread over the wheels. The wheels are a dark brown color, which is presumably meant to resemble wood. The front end of the Pumpkin Carriage isn't apparent due to it being identical on both sides, but it is across from where the driver of the carriage is sitting.

The Pumpkin Carriage's handling and speed are similar to that of the other carriages. It has rather impressive speed, matching that of the Offroader. The handling is slow but smooth, it handles corners very well. While it is a rather hefty vehicle, it's not enormously so, and squeezing through most tight roads and bridges is surprisingly easy. However, turns are hard for this vehicle, and a lot of times the carriage flips over.

The Pumpkin Carriage in a player's inventory. 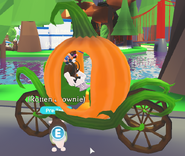 A player riding the Pumpkin Carriage.
Community content is available under CC-BY-SA unless otherwise noted.
Advertisement