Adopt Me! Wiki
Register
Don't have an account?
Sign In
Advertisement
in: Halloween, Toys, Limited,
and 9 more

View source
watch 02:34
Fire Emblem Warriors: Three Hopes - The Loop
Do you like this video?
Play Sound
Not to be confused with Throwing Pumpkin or the Pumpkin (Pet).

The Pumpkin is a limited rare toy in Adopt Me! that was obtainable from the 2017 Halloween Event. Players were able to exchange candies for items with the Headless Horseman. To obtain this item, the player had to trade

5 with the Headless Horseman. It was removed from game on November 1, 2017, and can only be obtained through trading.

It bears a similar appearance to the Throwing Pumpkin, however, there is a face carved in.

A player before shaking the Pumpkin. 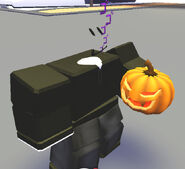 A player after shaking the Pumpkin.
Community content is available under CC-BY-SA unless otherwise noted.
Advertisement