Adopt Me! Wiki
Register
Don't have an account?
Sign In
Advertisement
in: Pets, Halloween Event (2020), Halloween,
and 8 more

View source
watch 02:53
GTA: The Criminal Enterprises - The Loop
Do you like this video?
Play Sound
Not to be confused with Pumpkin (Toy) or the Throwing Pumpkin.

Free (Temporary, obtained by completing the Pumpkin Smash Minigame for the first time)

The Pumpkin was a limited pet from the Halloween Event (2020) that was removed on November 11, 2020. It was obtained after a player completed the Pumpkin Smash mini game for the first time. Players cannot get any more Pumpkins after they received their first one. It was automatically able to fly and ride, meaning that you didn't have to use a Fly-A-Pet Potion or a Ride-A-Pet Potion. The pet was also automatically full grown once you received it from the Pumpkin Smash.

This pet couldn't be traded or gifted, meaning there was no legitimate way of obtaining a Neon or Mega Neon version of the Pumpkin.

The Pumpkin is an orange pumpkin with flat green leaves on the bottom and a curvy brown stem on top. The bright yellow eyes jiggle and wobble in their dark oval eye sockets.

Here are the tricks the Pumpkin learns in order: 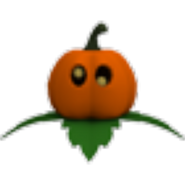 A Pumpkin in a player's inventory. 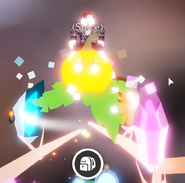 What a Neon Pumpkin could look like, made by going in between the crystals on top of the Potion Shop.
Community content is available under CC-BY-SA unless otherwise noted.
Advertisement