Adopt Me! Wiki
Register
Don't have an account?
Sign In
Advertisement
in: Monkey Fairground Event, Robux, Interactable,
and 6 more

View source
watch 02:53
GTA: The Criminal Enterprises - The Loop
Do you like this video?
Play Sound
Not to be confused with Monkey Box.

195 in Adopt Me! during the Monkey Fairground event. Every time one is opened, there is a 90% chance to get a Monkey and a 10% chance to get an Albino Monkey, as well as two other items. As the event is over, it can now only be obtained through trading.

After talking with the monkey NPCs, if players have three of these ingredients found in the boxes, they will make a Monkey the same type as themselves. These are all the monkeys players could obtain during the event: 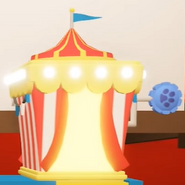 The Premium Monkey Box on display at the Monkey Fairground.
Community content is available under CC-BY-SA unless otherwise noted.
Advertisement