Adopt Me! Wiki
Register
Don't have an account?
Sign In
in: Potions, Potion Shop, Bucks,
and 12 more

Potions are consumables that can be either fed to the player or the player's pet to obtain the desired effect. They are found in the 'Food' section of a player's inventory. Players are able to obtain these potions with

Robux , From Gifts, or from events. The potions players can buy with

Bucks are located in the Sky Castle and the Potion Shop. Some particular potions can be brewed using their own respective cauldrons, which you can buy inside your house. Each potion has its own effect. Some potions are stackable, it means that the more a player drinks of that potion the more the effect they will have such as the Anti-Gravity Potion and the Hyperspeed Potion. Two of the most bought potions are the Fly-A-Pet Potion and the Ride-A-Pet Potion, both costing

There are several potions available for purchase in the Sky Castle. These potions will wear off when the player resets or when the player consuming the effect leaves the game.

There are also other potions obtainable during specific events. The effects of these potions will disappear if a player resets their character or leaves the game.

There are also potions in the Potion Shop that cost either

Robux. They are only able to be fed to pets. These are the potions that can be bought from the Potion Shop.

There are cauldrons that can brew potions and can be placed in a player's house. These cauldrons in the 'Rare' section of the house furniture when inside a player's house. All the options below may be stacked, meaning a player can drink lots of potions to increase the effect of the potion, except for the Big Head Potion. The cauldrons are all black and filled with a colored liquid. When brewing, the inside of the cauldron glows, bubbles appear on the surface, and in the air, there is a timer that shows how long it will take for the potion to finish brewing. The player also gets a message when it is done brewing. If you do not collect the potion and reset your character, the potion will no longer be in the cauldron. It could be bought at your house when you press the edit button. 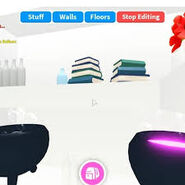 All the Collector's Potions in Adopt Me!.