Adopt Me! Wiki
Register
Don't have an account?
Sign In
Advertisement
in: Toys, Rare, Rare Toy,
and 7 more

Can be given to an equipped pet to chew on.

499 (Small, Big, and Massive Gifts)
The Potato Chew Toy is a limited rare toy that was added into Adopt Me! on March 18, 2021, as part of the new gifts rotation. It is no longer in the current Gifts rotation, and can only be obtained through trading.

The Potato Chew Toy, true to its name, features a light brown-colored potato with two large, bulging dark brown eyes and a small mouth. It also has a few darker spots around its body, imitating the surface of a potato.

To interact with this item, a player can click/press their screen to throw the chew toy onto the ground, where an equipped pet will pick it up and chew it. 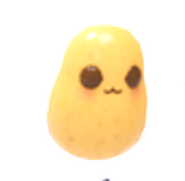 The Potato Chew Toy at the Gifts Display.
Community content is available under CC-BY-SA unless otherwise noted.
Advertisement