Adopt Me! Wiki
Register
Don't have an account?
Sign In
Advertisement
in: Food, Interactable, Bucks,
and 2 more

Popcorn is a common food item in Adopt Me!. It can be used/interacted with five times before it disappears from the player's inventory. Popcorn can be fed to a baby or a pet to fulfill the "Hungry" ailment.

2, but was removed after the Farm Shop Update was released and can now only be obtained via trading or obtaining it from the V.I.P room.

The Popcorn's appearance is a red and white striped popcorn box. The shape of the box is square shaped. The Popcorn itself is a light pastel yellow. 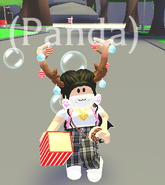 A player holding a Popcorn.

The Popcorn in the Green Groceries.
Community content is available under CC-BY-SA unless otherwise noted.
Advertisement