Adopt Me! Wiki
Register
Don't have an account?
Sign In
Advertisement
in: Summer Update (2019), Pool Store, Toys,
and 4 more

A float that players can sit on. Mainly used at the Hot Springs.

The Pizza Float is a rare toy that was added to Adopt Me! during the Summer Update of 2019. It can be found and purchased in the Pool Store for

The Pizza Floats on display. 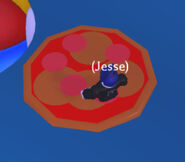 A player using the Pizza Float.

A player holding the Pizza Float.
Community content is available under CC-BY-SA unless otherwise noted.
Advertisement