Adopt Me! Wiki
Register
Don't have an account?
Sign In
Advertisement
in: Limited, Unavailable Pets, Unavailable,
and 2 more

The Pink Egg is a limited rare egg in Adopt Me! that was obtainable right after the Pets Update arrived. When players participated in the Pet Countdown event, they would automatically receive this egg in their inventory.

Players would receive a Pink Egg after telling Sir Woofington to build a pet department in the Adopt Me! Nursery. It costs

100 to time travel and go back in time to when they were building the Nursery. After players had completed the task, Tom would give them a Pink Egg. The Pink Egg could only hatch into an uncommon Pink Cat. Each player was only entitled to one egg per person. This egg is now only obtainable through trading.

Another similar egg that was released into Adopt Me! around the same time was the Blue Egg, which could only hatch into a Blue Dog, although the way to obtain this egg is not to be confused with how players could obtain the Pink Egg.

The Pink Egg features the exact same appearance to the Pet Egg and Blue Egg, except this egg is entirely pink while the Pet Egg is white and the Blue Egg is blue. 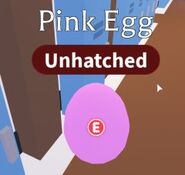