Here are the tricks the Pine Marten learns in order: 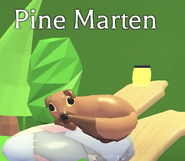 A teaser image of the Pine Marten.