The Pig has a round shaped pink body, pink round feet, and a small curly pink tail. It has a darker pink nose with two large nostrils, two black, beady eyes, and triangular-shaped ears with a reddish-pink color triangle shaped insides.

Here are the tricks the Pig learns in order:

The Neon version of the Pig glows bright pink in its ears, most of its snout, feet, and tail.

The Pig in its Mega Neon version, cycles through the colors of the rainbow in the same spots as it is in the Neon form. 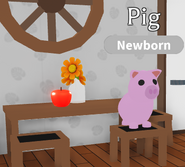 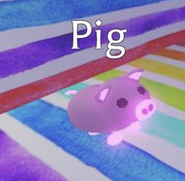