Adopt Me! Wiki
Register
Don't have an account?
Sign In
Advertisement
in: Pets, Uncommon Pets, Unavailable Pets,
and 6 more

View source
watch 02:53
GTA: The Criminal Enterprises - The Loop
Do you like this video?
Play Sound
Not to be confused with Rock.

Free, could be retrieved from outside the Nursery from Burt on April Fools (2020)

The Pet Rock was a temporary uncommon pet in Adopt Me! that was available for free during April Fools' Day 2020.

The Pet Rock was a joke pet that was originally only available during April Fools' Day 2020, but its availability was extended to April 3, 2020. After the extended time, it disappeared from every player's inventory and became completely unobtainable.

The pet used to be available outside the Nursery, with an NPC called Burt having a few boxes of Pet Rocks and crossed-out boxes of prices.

The Pet Rock came with the ability to be flyable and rideable and was already full grown. There was no way for a player to simultaneously have two Pet Rocks in their possession, as only one could be collected from the pile near the Nursery and it couldn't be traded or given away. The Pet Rock would always disappear out of the player's inventory after they left the game, similar to a Healing Apple, Teacher's Apple, Marshmallow, Cup of Water, Cup of Coffee, Donut, and 2D Kitty.

The Pet Rock features a gray rock that has a crude face made out of what seems like a pair of googly eyes and a taped-on dark red pipe cleaner that symbolizes a smile.

The Pet Rock consists of the following tricks:

All of these tricks were the same, and the Pet Rock sat still and did not do anything.

Burt and the Pet Rocks.

A Pet Rock in a player's inventory. 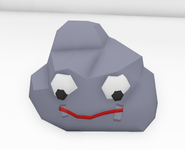 The Pet Rock on the April Fools’ Day 2020 icon.
Community content is available under CC-BY-SA unless otherwise noted.
Advertisement