Adopt Me! Wiki
Register
Don't have an account?
Sign In
Advertisement
in: Pets, Bucks, Rare,
and 8 more

600 at the Nursery. It is most likely to hatch into an uncommon pet (35%). This egg takes exactly five tasks to hatch. Every pet which does not belong to a limited egg or a gamepass pet is available in this egg. Players can purchase it from Holly, the cat lover NPC in the Nursery.

The Pet Egg is a smooth, cream-colored egg, similar to the starter egg, with no other accessories or details.

The NPC Holly with the Pet Egg.

The Pet Egg as seen in a video thumbnail. 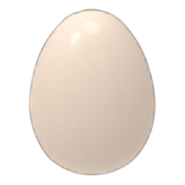 The Pet Egg in a player's inventory.
Community content is available under CC-BY-SA unless otherwise noted.
Advertisement