Adopt Me! Wiki
Register
Don't have an account?
Sign In
Advertisement
in: Pets, Ultra Rare, Ultra-Rare Pets,
and 4 more

The Penguin is an ultra-rare pet in Adopt Me! that can be obtained by buying the Golden Goldfish for

The Penguin's appearance features a half black and half cream colored body. It also has a yellow beak, yellow feet, and two black beady eyes.

These are the tricks the Penguin learns in order:

The Neon Penguin glows a pink color on its feet and flippers.

The Mega Neon Penguin cycles through the colors of the rainbow on the same areas as the Neon Penguin. 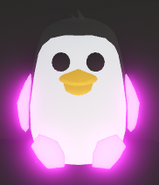 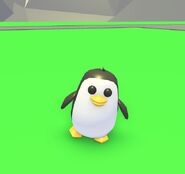 A Penguin in-game.
Community content is available under CC-BY-SA unless otherwise noted.
Advertisement