The Peacock is a legendary pet that was released in Adopt Me! on April 2, 2021, and it is currently purchasable for

550. It is one of the pets in the Pet Shop that is non-limited, which includes the Sloth, Kitsune, Panda, Cerberus, Guardian Lion, Red Squirrel, Cobra, Axolotl, and the Winged Horse.

The Peacock features a colorful bird with a dark blue-colored body and a long neck. It has three blue crests, two black eyes with white eye-rings, and golden yellow beak and feet. Meanwhile, the wings are covered with white feathers and black stripes, ending with a primary orange color.

The Peacock also has nine teal colored tail feathers that have multicolored spots simular to blue eyes each. The eye spots' layers include an inner blue color, surrounded by sky blue, orange, and cyan borders.

Here are the tricks the Peacock learns in order:

The Neon Peacock glows green on its neckline and upper part of its wings and multiple colors, such as orange, lime, and blue, on the eyespots of its tail feathers.

The Mega Neon Peacock glows in the same areas as the Neon Peacock, except those areas cycle through the colors of the rainbow. 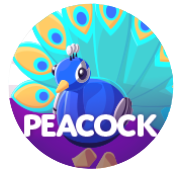 The Peacock displayed in the Pet Shop.

The Peacock as seen in a player's inventory. 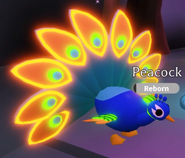