Adopt Me! Wiki
Register
Don't have an account?
Sign In
Advertisement
in: Toys, Food, Shops,
and 6 more

The Patterns Egg is an uncommon food item in Adopt Me!. It was obtainable during the Easter Event (2019) by collecting the egg currency scattered across the Adoption Island.

When players collected the eggs, they appeared in their inventory. Players could have multiple versions of the Patterns Egg as there were repeat variations around the map. The Patterns Egg stayed in the player’s inventory even when they spent the currency on the event items.

The other eggs players collected alongside the Patterns Egg include the Stripes Egg and Stars Egg.

The Patterns Egg features a round, oval-shaped object. Pink lines, yellow lines, and circle patterns are designed around the side. 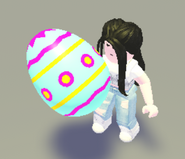 The Patterns Egg as shown in the Gumball Machine.
Community content is available under CC-BY-SA unless otherwise noted.
Advertisement