The Parrot is a limited legendary pet which was added to Adopt Me! on August 31, 2019. As it is now unavailable, it can only be obtained by trading or by hatching any remaining Jungle Eggs. Players have a 3% chance of hatching a legendary pet from the Jungle Egg.

The Parrot has red feathers on its body, white feathers on part of its face, red, yellow, and blue feathered wings respectively, a black beak, black eyes, and yellow talons. The Parrot resembles its real-life counterpart, the Scarlet Macaw.

Here are the tricks the Parrot can learn in order:

The Neon version of the Parrot glows on its wings, tail, and talons with the same color in its regular form.

A Mega Neon Parrot glows in the same areas as the Neon Parrot, except it will cycle through the colors red, yellow, teal, pink, and purple.

The Parrot on Adopt Me!'s thumbnail for the Jungle Egg Update. 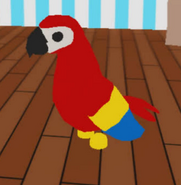 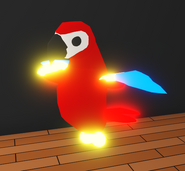