The Parakeet is a rare pet that was released in Adopt Me! on July 21, 2022. It can be obtained by hatching a Cracked Egg, Pet Egg, Royal Egg, or by trading.

The Parakeet has a blue chest, a white head, white wings, and a white tail. It has gray stripes along the top of its head and gray dots underneath its beak. Its beak and feet are orange.

Listed below are the tricks the Parakeet learns in order:

The Neon Parakeet glows bright blue on its underbelly and tail.

The Mega Neon Parakeet glows in the same areas as the Neon Parakeet, except these areas cycle through the colors of the rainbow. 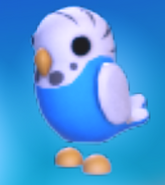 A teaser image of the Parakeet. 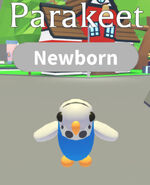 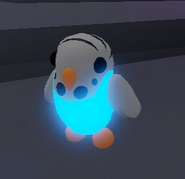 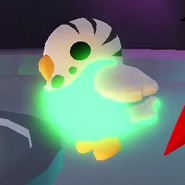