Adopt Me! Wiki
Register
Don't have an account?
Sign In
Advertisement
in: Toys, Limited, Collectible Items,
and 10 more

The Panda Pal is an uncommon toy in Adopt Me! which players could buy at the Chinese New Year Stand on February 16, 2018. It was sold for

The Panda Pal bears minor resemblance to the pet Panda in Adopt Me!, which was added into the game as a permanent gamepass pet during the 2020 Lunar New Year event. 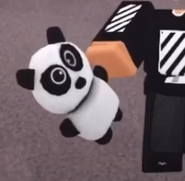 A player holding the Panda Pal.
Community content is available under CC-BY-SA unless otherwise noted.
Advertisement