Adopt Me! Wiki
Register
Don't have an account?
Sign In
Advertisement
in: Pets, Ultra Rare, Ultra-Rare Pets,
and 8 more

249. It was originally added for the 2020 Lunar New Year Update. It is now located in the Pet Shop or in the Shop tab where gamepasses are sold.

The Panda has a round, white head and body with black ears, arms, legs, nose, and circles around its eyes. Its inner ears are a slightly lighter shade of black. It follows the same structure as the Brown Bear, Polar Bear, and Koala.

Listed below are the tricks the Panda learns in order:

The Neon Panda glows bright white in all of its white body parts, with an addition of the inside of its ears also glowing white.

The Mega Neon Panda glows in the same areas as the Neon Panda, except it cycles through the colors of the rainbow.

The Panda on display in the Pet Shop. 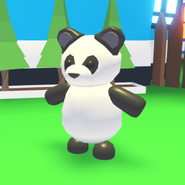 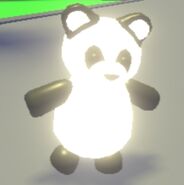