The City Hall had no purpose, except for holding the statues of NewFissy and Bethink, who are the creators of Adopt Me! and known together as DreamCraft. It is no longer in the game.

The Gym, which was located next to the Pool, contained two tennis courts, two couches, four chairs, four showers, four benches, and one sauna.

After being under maintenance for a long time, the Gym was replaced with the Pool Store.

The Playground is located in a giant wooden box holding sand, right of the entrance to the Neighborhood. At the Playground are four swing sets, poles that your pet can hover through (Weave), a blue tunnel, a roundabout, two big trampolines and one small one, a slide, and a wooden shack holding the obby portals. The Playground used to have a Treehouse on the biggest tree but was removed on Febuary 2021.

Going to the Playground is the main way of completing the Bored ailment, which can also be completed by playing piano at your house.

In February 2021 the treehouse in the area was removed as it served no purpose.

Obbies are obstacle courses that can be done by both parents and babies, though they are optional. A player wins a special Roblox badge for completing an obby, but they do not get any money. The shack holding all of the obby portals is found at the Playground (on the other side of the slide).

To prevent cheating, toys, pets with potion enhancements, potions, and vehicles do not work in the obbies.

The Hospital is a building that can be found next to the Pet Shop and a Premium Plot. The place is used to cure the Sick ailment and allows the player to heal their pet, or themselves if they are a baby. There are three ways for a player to heal themselves and their pet; eating a Healing Apple, which can be found in a room on the left side of the Hospital, sitting on the operation bed in a room also in the left wing, or the player can ask Doctor Heart to heal their family.

The School is situated between a bridge and the Gifts Stand. The purpose of this building is to fulfill the "School" task. In the School, there are four rooms; a classroom, a pet room, a library, and a computer room. At the end of the hallway you can see the NewFissy NPC. In the Pet Room, there are pet beds and food and water bowls, as well the Pet Trainer Shane. You can also obtain a maximum of 50 apples from the classroom.

The soccer field is a light brown field located left of the Toy Shop and right of the Campsite. It has two soccer nets and a giant soccer ball that can be pushed. Also, it has a running track on the outside of the Soccer Field. Once the soccer ball goes in the goal, it respawns into the middle of the pitch again.

The soccer field currently serves no purpose other than for decoration.

During the Christmas Event (2019) update, it was replaced by the Winter Village.

During the Fall Update (2020), the soccer field has been replaced with what seems to be a pumpkin patch.

During the Winter Holiday (2020), it was replaced with the Winter Castle.

In February 2021, it was removed from the game for the time being, as it took up too much space.

The Campsite, or Campground, is a campsite tucked in a mountain valley and located left of the soccer field and right of Green Groceries. The Campsite activity occurs once every three in-game days, and when completed, it gives

18 as a reward. At the Campsite there are two big tents and three small tents, holding sleeping bags which can be slept in by a baby or pet. There is also a campfire surrounded by four logs that can be sat on, and a chair holding free marshmallows on sticks. Besides that, there is also the Camping Lodge, which you can rent out for 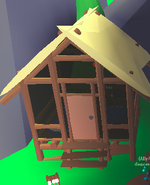 The outside of the Camping Lodge

It was remodeled when the Fall Event (2020) was released. It hasn't been announced if this remodel is permanent, or just for the event.

The Water Park at night

The Arcade was a building in the old Adopt Me!, and it was forgotten until Legacy Adopt Me came back for a few days, and players saw it again. It had boarded up windows, saying coming soon, but it was never added into the game.

Arcade Roblox Adopt Me!
Add a photo to this gallery

The Safety Hub is a building located next to the Hat Shop. In this building, players can complete the Trade License test to obtain a Trade License. The Trade Book, containing a player's trade history in the last thirty days, can also be accessed here. It was released in early November 2020.

Retrieved from "https://adoptme.fandom.com/wiki/Other_Buildings?oldid=273545"
Community content is available under CC-BY-SA unless otherwise noted.