Adopt Me! Wiki
Register
Don't have an account?
Sign In
Advertisement
in: Toys, Uncommon, Uncommon Toys,
and 10 more

Free (On the 11th day of the Advent Calendar)

The Ornament Throw Toy is a limited uncommon toy in Adopt Me!. It could be obtained from the 2019 Advent Calendar on December 11, 2019, during the Christmas Event (2019). As the Advent Calendar left after the event, it can now only be obtained through trading.

When thrown, a player's equipped pet would fetch the Ornament Throw Toy and bring it back to the player.

The Ornament Throw Toy is a round multicolored ornament with a thin light gray cap and hook. Its design is the same as the Bauble Balloon. 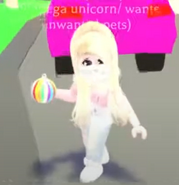