View source
watch 02:53
GTA: The Criminal Enterprises - The Loop
Do you like this video?
Play Sound
Not to be confused with Octopus Plush.

The Octopus features a salmon-colored body with eight tentacles and a pastel yellow underbelly. It has two large beady black eyes. Underneath each tentacle, there are two suckers.

Below are the tricks the Octopus learns in order:

The Neon Octopus has a yellow glow underneath its tentacles and ears.

The Mega Neon form of the Octopus glows in the same area as the Neon Octopus. However, it cycles through the colors of the rainbow. 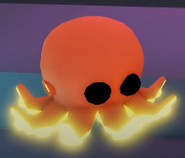