Adopt Me! Wiki
Register
Don't have an account?
Sign In
Advertisement
in: Limited, Pets, Gumball Machine Eggs,
and 15 more

The Ocean Egg is a limited legendary egg in Adopt Me!. It was released on April 16, 2021, at 7:30 AM PT, replacing the Fossil Egg. It was replaced by the Mythic Egg on August 19, 2021. The Ocean Egg is no longer obtainable and can now only be obtained through trading.

On April 9, 2021, a large red and white floating banner with a live countdown was held by a flying Starfish and Crab with a white set of wings that has some purplish particle effects around them. Around the Nursery, several ocean-themed items such as coral and seaweed were used as decorations. When the countdown ended and the Ocean Egg was released, the nursery was flooded, and stayed that way until the release of the Mythic Egg.

The Ocean Egg is a dark blue-colored egg with dark green sea kelp on its underside; this kelp often detaches when the egg moves. A bright yellow starfish lies on the top right corner, with yellow and brown accents in the center.

The interior of the Nursery during the Ocean Egg update. 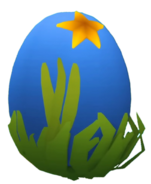 The Ocean Egg in game.

The exterior of the Nursery during the Ocean Egg update. 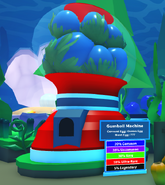 The Ocean Eggs in the Gumball Machine. 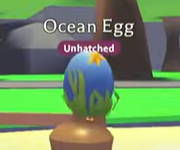 The teaser of the Ocean Egg.
Community content is available under CC-BY-SA unless otherwise noted.
Advertisement