Adopt Me! Wiki
Register
Don't have an account?
Sign In
Advertisement
in: Pets, Monkey Fairground Event, Legendary,
and 6 more

The Ninja Monkey is a limited legendary pet in Adopt Me! that was obtainable in the Monkey Fairground. It was released on May 28, 2020, at 4:00 PM (UTC). To obtain this pet, players needed 3 Scroll Ingredients to transform a normal Monkey into a Ninja Monkey. Players can get Ingredients from the Monkey Boxes, which cost

600. As the event has ended, it is now currently only obtainable through trading.

The Ninja Monkey is a Monkey dressed as a ninja with a Kitsune Mask on the side of its head. It appears that it's holding a scroll in its tail. The Kitsune Mask and Ninja Headband are tradable and come with the Ninja Monkey. They are separate pet accessories and can be found in the 'Pet Wear' section in a player's inventory.

Here are the tricks the Ninja Monkey learns in order:

The Neon version of the Ninja Monkey glows light blue on its belt and feet.

The Mega Neon Ninja Monkey rotates through the colors of the rainbow on its belt and feet.

A Ninja Monkey in a player's inventory. 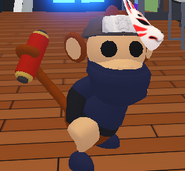