Adopt Me! Wiki
Register
Don't have an account?
Sign In
Advertisement
in: Toys, Gifts, Pets,
and 8 more

The Newspaper Chew Toy is an uncommon toy in Adopt Me! that could have previously been obtained through opening Small, Big, and Massive Gifts for

499 respectively. When a player interacts with it, the pet the player has equipped will hold it in their mouth.

As of the 2021 Gift Refresh update, the Gifts were replaced with another set of items. It can now only be obtained through trading.

The Newspaper Chew Toy, true to its name, is a rolled up sheet of newspaper bound with a black tie. 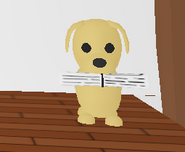 A Newspaper Chew Toy as seen with Dog. 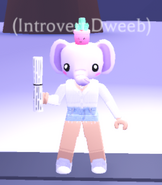