Teacher in the Adopt Me! School.

NewFissy is one of the developers in Adopt Me!. He is also an NPC along the hallway of the School.

NewFissy has a bald head and a big toothy smile. By going to NewFissy's Roblox profile, the clothing items worn by his NPC are identifiable. On his head, he wears a black steampunk tophat and a limited item "Winged Headphones of Beautiful Music" by Roblox. His shirt is gray with a red/orange Hawaiian button up over top, titled "Red Hawaiian Shirt" by Kanuki Falls. His pants are part of a Naruto cosplay outfit, covering his legs but leaving his toes exposed. These pants are titled "[Gaiden] Naturo Bottom" by RELL World. On his back, he totes along the "Turtle Back Shell" by Roblox as well as the shoulder accessory 'Adopt Me White kitty' by Roblox.

Newfissy's dialogue when interacted with by a player is as follows:

"Hey guys! Welcome to The School. I'm one of the teachers here. My name is NewFissy, but you can call me Mr. Fissy. I've earned this title by scripting myself to be principal... Hahaha only kidding." 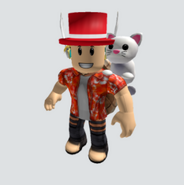