Adopt Me! Wiki
Register
Don't have an account?
Sign In
Advertisement
in: Limited, Gumball Machine Eggs, Bucks,
and 8 more

The Mythic Egg is a limited legendary egg in Adopt Me!. It was released on August 19, 2021, replacing the Ocean Egg. It cost

750 and could be purchased from the Gumball Machine in the Nursery. It was replaced by the Woodland Egg on March 17, 2022. The Mythic Egg can now only be obtained through trading.

On July 16, 2021, a large red and white floating banner with multiple question marks was held by a flying Phoenix and Wyvern. The banner was used as a countdown for the Mythic Egg release. Pillars and purple crystals were also added to decorate the Nursery and Adoption Island.

The Mythic Egg has a variety of colors, with mostly a greenish-blue gradient. Pointed scales wrap around the egg. It slightly resembles a dragon fruit. 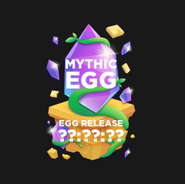 The Mythic Egg countdown icon as seen on a player's screen.

The Mythic Egg countdown banner, featuring the Phoenix and the Wyvern. 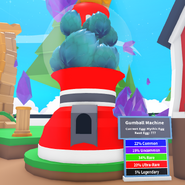 The Mythic Eggs in the Gumball Machine.

The countdown towards Mythic Eggs.
Community content is available under CC-BY-SA unless otherwise noted.
Advertisement