Adopt Me! Wiki
Register
Don't have an account?
Sign In
Advertisement
in: Vehicles, Scoob Event, Temporary,
and 5 more

Talk to Scoob at the Scoob Event Platform

The Mystery Machine was a vehicle that was available in the Scoob Event, that began on May 4, 2020 at 11:00 AM (CT). It was a free vehicle that had the rarity "Event", however, it was sorted as common in the backpack.

It was the first and only temporary vehicle in Adopt Me!. It was removed from the game completely when the Scoob Event ended and it is therefore completely unobtainable.

The Mystery Machine is a van with an aqua, lime, and orange paint scheme, with various flower paintings, adorned along the sides of the van. Its paint scheme is somewhat related to the Flower Wagon, as they are both hippie-themed 1960's era vehicles.

The Mystery Machine has unique yellow rims. It is one of the two vehicles in Adopt Me! to have yellow colored rims, along with the Rocket Racer, and one of the three vehicles in the game to not have standard white rims, the other two being the aforementioned Rocket Racer and Flower Wagon, having yellow and pink rims respectively.

The Mystery Machine also has a light bar, front-mounted spare tire, and roof rack. The roof rack has two grey antennas and a gray duffel bag on top of it, and two orange surfboards are placed right in front of the roof rack. The light bar is functional and has a faint glow at night just like any other vehicle headlight would. The rear of the van has reverse lights, which permanently glow. It is the only vehicle in the game to have a distinct pair of reverse lights.

This vehicle is meant to resemble The Mystery Machine from the series Scooby-Doo, as it is a vehicle prominently featured in the series and movie, used by the gang as their main means of transport and it is also often used to help solve mysteries.

The Mystery Machine on its side. 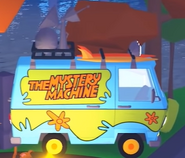 Mystery Machine at the Scoob Platform.

The Mystery Machine as seen in-game during day. 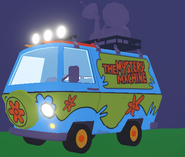 The Mystery Machine as seen in-game during night.
Community content is available under CC-BY-SA unless otherwise noted.
Advertisement