Adopt Me! Wiki
Register
Don't have an account?
Sign In
Advertisement
in: Toys, Interactable, Common,
and 6 more

The Musical Conch is a common toy that was in Adopt Me! from June 8, 2021 to July 8, 2021. It was released as part of the World Oceans Day update. It could be obtained for

Free at the Oceans Day Stand found next to the main bridge that connects the Adoption Island and the Neighborhood. This item is untradeable, and only players that claimed it during the World Oceans Day update will have it.

The Musical Conch takes shape as a spiral tan shell, with a small hole on the bottom. When you play it, you sit down, similar to the Didgeridoo.

The Musical Conch produces soothing music with an ocean soundscape when used. Players can hear birds, ocean waves, and other sounds when it is played. It serves no purpose other than being used for the player’s enjoyment. 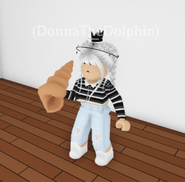 A player holding a Musical Conch.

A player using a Musical Conch.
Community content is available under CC-BY-SA unless otherwise noted.
Advertisement