Adopt Me! Wiki
Register
Don't have an account?
Sign In
Advertisement
in: Car Dealership, Vehicles, Bucks,
and 5 more

The Muscle Car is a two-seater ultra-rare vehicle in Adopt Me! that can be bought for

1,800 in the Car Showroom. It can also be obtained through trading.

The Muscle Car has a decent speed, being the fastest car in the Car Showroom. Its speed matches that of the Convertible which it replaced. It only has two seats, making it largely inefficient for mass transportation.

The design of the Muscle Car is almost identical to that of the Chevrolet Corvette C1, with the exception of the rear end, which bears a much closer resemblance to that of the Chevrolet Corvette C3. Players have the ability to change the Muscle Car's color upon initially buying it. However, after the purchase has been made, the color of the car is final and cannot be changed.

The current Muscle Car displayed in the Car Showroom.

The Muscle Car as seen in-game during day. 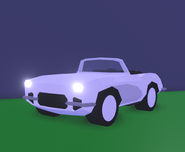 The Muscle Car as seen in-game at night.

A player driving the Muscle Car.
Community content is available under CC-BY-SA unless otherwise noted.
Advertisement