Adopt Me! Wiki
Register
Don't have an account?
Sign In
Advertisement
in: Vehicle Dealership, Vehicles, Bucks,
and 3 more

The Multi-Bike is a two-seater common vehicle in Adopt Me! that could be obtained by purchasing it for

300 in the Car Showroom. As it was removed from the Vehicle Dealership on March 3, 2022, it is now only obtainable through trading or purchasing the Starter Pack gamepass for

The Multi-Bike resembles a modern tandem bike. It is incredibly similar to the regular Bike, therefore, resembles a traditional BMX bicycle, with the addition of an extra seat behind it. The Multi-Bike's color can be chosen after purchase, however, once it is chosen, it cannot be changed again.

The Multi-Bike is the second-to-last expensive but is also one of the slowest two-wheeled vehicles in Adopt Me!. It is however much faster than the conventional Bike, has an extra seat, and does not slow down when carrying a baby. However, it costs four times as much as a regular Bike, making it considerably more expensive. It is also slower to the similarly priced Motorcycle, although it still costs 100 Bucks less, and also offers an extra seat. 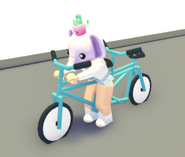 A player riding the Multi-Bike.

The Multi-Bike previously displayed in the Vehicle Dealership.
Community content is available under CC-BY-SA unless otherwise noted.
Advertisement