Adopt Me! Wiki
Register
Don't have an account?
Sign In
Advertisement
in: Vehicle Dealership, Vehicles, Interactable,
and 7 more

View source
watch 02:34
Fire Emblem Warriors: Three Hopes - The Loop
Do you like this video?
Play Sound
Not to be confused with Monocycle.

The Motorcycle is a common single-seater vehicle in Adopt Me! that could be found and bought in the Vehicle Dealership for

400. As it was removed from the Vehicle Dealership on March 3, 2022, it is now only obtainable through trading.

It is the fastest out of all two-wheeled vehicles with a maximum speed of 37 studs per second. Its speed is not affected if the player is carrying babies while riding it. Its handling is poor and is prone to tipping and swerving out of control.

The Motorcycle's appearance mostly resembles the 70's models of the Honda CB series. However, there is not a bike to that it bears an exact resemblance. Its color could be customized from a large assortment of colors, just like all the other vehicles that can be brought in the Vehicle Dealership. It has a cosmetic light that glows in the dark. 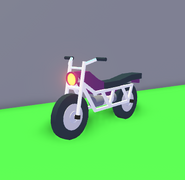 The Motorcycle in game.

A player driving the Motorcycle.

The Motorcycle in the Vehicle Dealership.
Community content is available under CC-BY-SA unless otherwise noted.
Advertisement