Adopt Me! Wiki
Register
Don't have an account?
Sign In
Advertisement
in: Vehicles, Rare, Shops,
and 6 more

View source
watch 02:34
Fire Emblem Warriors: Three Hopes - The Loop
Do you like this video?
Play Sound
Not to be confused with Mono-Moped.

The Moped is a rare two-seater vehicle in Adopt Me!, which could previously be obtained for

800 in the Vehicle Dealership. It was added to the game on July 17, 2018. It is now only obtainable through trading.

The Moped is a classic motor scooter, which bears a close resemblance to a Vespa. A key difference between the Moped and the Vepsa is that the headlight unit is mounted on the chassis, and not on the front fork instead of the handlebar. Like many vehicles in the game, the Moped's color can be customized.

The Moped displayed in the Vehicle Dealership. 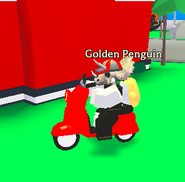 A player and a Golden Penguin riding the Moped. 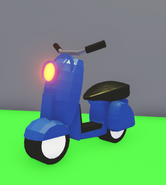 The Moped in-game.
Community content is available under CC-BY-SA unless otherwise noted.
Advertisement