Adopt Me! Wiki
Register
Don't have an account?
Sign In
Advertisement
in: Vehicles, Collectible Items, Legendary Vehicles,
and 9 more

View source
watch 02:53
GTA: The Criminal Enterprises - The Loop
Do you like this video?
Play Sound
Not to be confused with Moped.

The Mono-Moped is a legendary single-seater vehicle in Adopt Me! that was added on March 25, 2018. It could be obtained from an old gifts rotation. It cost

499 in its respective gifts. Since the Mono-Moped is no longer part of the gift rotation, it can now only be obtained through trading.

The Mono-Moped closely resembles the Moped, with its most distinctive difference being the fact that it has a large, singular wheel, hence the name "Mono", meaning one. The Mono-Moped is bright red, having two distinctive exhausts which emit smoke particles, and the steering handles are also connected lower down than those of the Moped. Other differences include the seat being slightly thinner, and the headlight enclosure being white instead of having the same color as the rest of the body.

The Mono-Moped on the Gift display. 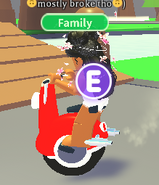 A player riding the Mono-Moped. 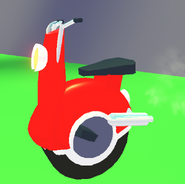 The Mono-Moped in-game.
Community content is available under CC-BY-SA unless otherwise noted.
Advertisement