Adopt Me! Wiki
Register
Don't have an account?
Sign In
Advertisement
in: Rare, Monkey Fairground Event, Toys,
and 10 more

The pogo resembles the Monkey pet holding onto a branch. 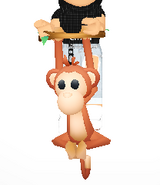 A player riding a Monkey Pogo.
Community content is available under CC-BY-SA unless otherwise noted.
Advertisement