Adopt Me! Wiki
Register
Don't have an account?
Sign In
Advertisement
in: Pets, Monkey Fairground Event, Legendary,
and 7 more

195 each. There is a 5% chance of getting the Staffs from their respective box. It costs at least

585 (if not more) to obtain three Staff Ingredients without trading for them. As its respective event has ended, it is now currently only obtainable through trading.

The Monkey King is a yellow and tan monkey with gold and red armor, inspired by the Chinese legendary figure "Sun Wukong." In its tail is the staff that is used to create the Monkey King. It also has a golden crown along with two red feathers that stand up and curl backwards.

Here are the tricks the Monkey King learns in order:

The Neon version of the Monkey King has its staff, helmet feathers, and sleeves glowing light blue.

The Mega Neon version of the Monkey King glows in the same areas as the Neon Monkey King, except it cycles through the colors of the rainbow. 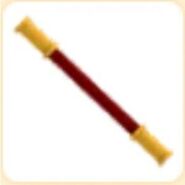 The Staff Ingredient used to make a Monkey King. 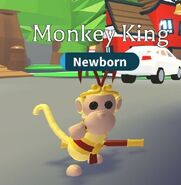