Adopt Me! Wiki
Register
Don't have an account?
Sign In
Advertisement
in: Monkey Fairground Event, Bucks, Interactable,
and 6 more

View source
watch 02:53
GTA: The Criminal Enterprises - The Loop
Do you like this video?
Play Sound
Not to be confused with Premium Monkey Box.

The Monkey Box is a rare gift in Adopt Me!. It could have been found and bought for

600 during the Monkey Fairground event. Every time one is opened, there is a guaranteed Monkey, as well as two other items. As its respective event has ended, it can now only be obtained through trading.

Players were instructed to find "ingredients" to make a special type of monkey. Once a player collected three ingredients of the same kind, after talking to the specified NPC, they were able to "create" a special monkey. Below are the different types of monkeys that could be obtained in the Monkey Fairground: 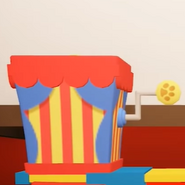 The Monkey Box on display at the Monkey Fairground Event.

A player holding a Monkey Box.
Community content is available under CC-BY-SA unless otherwise noted.
Advertisement