Adopt Me! Wiki
Register
Don't have an account?
Sign In
Advertisement
in: Pets, Rare, Rare Pets,
and 7 more

The Monkey is a rare pet in Adopt Me! that was available during the Monkey Fairground Event, which was first released on Thursday, May 28, 2020, at 11:00 AM (CT). As the event has ended, it is now currently only obtainable through trading.

There are 5 other versions of the Monkey: the Albino Monkey, Ninja Monkey, Business Monkey, Toy Monkey, and the Monkey King. To collect these variations, players must collect items from the Monkey Boxes that correlate to the Monkey they wish to obtain.

The Monkey has a beige face and has black, beady eyes. It has a tuft of brown hair on its head. The beige also appears on the Monkey's hands and in it's inner ears. The rest of the Monkey's body is brown.

Here are the tricks the Monkey learns in order:

When made Neon, the Monkey's feet, hands, and the inside of the ears turn a glowing, pale yellow.

When made Mega Neon, the Monkey glows at the same parts as the Neon version but alternates in the colors of the rainbow. 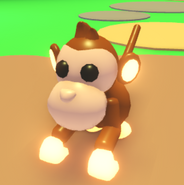