Adopt Me! Wiki
Register
Don't have an account?
Sign In
Advertisement
in: Houses, Bucks, House Decor,
and 2 more

N/A
The Money Tree is a house decoration in Adopt Me!, which costs

1450 in the furniture catalog, under the ‘Rare’ category. This piece of house decoration was released sometime around 2019, in the previous ‘Money Tree, New Mansion’ update.

When a player purchases the Money Tree, it is able to give them money periodically, providing a total of

100 per day. Once the player has collected up to

100 in a day, an icon will pop up preventing them from collecting any more. The icon reads:

"You've collected the maximum Bucks for today. Come back tomorrow for more!"

The Money Tree features a golden, jagged, round exterior connected to a tree branch, above a flat, circle-shaped base with a white glow. Every few seconds, an animation of green bills with the letters AM and golden coins explode from the top. 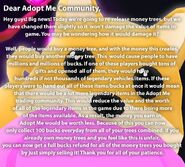 The message that pops up when you reach your daily limit.

The Money Tree in the Building catalog.
Community content is available under CC-BY-SA unless otherwise noted.
Advertisement