Adopt Me! Wiki
Register
Don't have an account?
Sign In
Advertisement
in: Houses, Robux, Gamepass,
and 3 more

The interior of the house is nearly identical to the Gingerbread House. It has two floors, with the doorway being on the side of the house, unlike the majority of the other houses in Adopt Me!. There is also an indoor pool room located right in front of the main doorway. 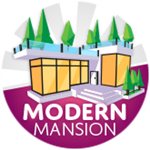