watch 03:19
Wiki Targeted (Games)
Do you like this video?
Play Sound

750. There is a 45% chance of hatching an uncommon pet from the Safari Egg. The Meerkat is no longer available and can only be obtained through trading or by hatching any remaining Safari Eggs.

The Meerkat has a thin, light brown body. The inside of its ears are pink, and it has a black nose, black beady eyes, and a long, stubby, light brown tail. When it is still, it stands up on its two back legs. When it follows a player, or if they are riding or flying one, it will crawl on its four paws.

A Mega Neon Meerkat cycles through the colors of the rainbow, alternating in the same areas of a regular Neon Meerkat. 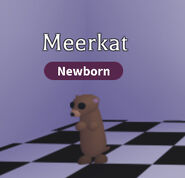 Player riding a meerkat in-game
Add a photo to this gallery
Retrieved from "https://adoptme.fandom.com/wiki/Meerkat?oldid=317313"
Community content is available under CC-BY-SA unless otherwise noted.