The Massive Gift is a legendary gift in Adopt Me! that can be purchased for

499. It is one of the three gifts on the Gifts Display, which is located in the center of the Adoption Island near the NPC Santa.

The Massive Gift features a purple gift with a golden ribbon wrapped around it. It bears a similar appearance to the Gift Throw Toy, the only difference being its size.

A player holding the Massive Gift. 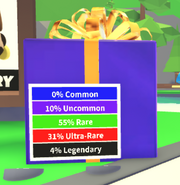 The Massive Gift at the Gifts Display.
Community content is available under CC-BY-SA unless otherwise noted.
Advertisement