The Marshmallow is a common food in Adopt Me! that can be obtained for free from the Camping Store. It can be equipped until you reach 30 Marshmallows in your inventory. You can equip a Marshmallow by the campfire, as they sit on a chair nearby. It can also be obtained from the cabin at the Campsite, which can be rented for

This food item can fulfil the Hungry ailment with 1 interaction for babies, while pets take the usual 5–7 seconds to fully consume the item. It disappears from the player's inventory after the player leaves the game.

The Marshmallow features a large white marshmallow on a long brown stick, with some bits of the small twig protruding from the tip.

If a player equips a Marshmallow and walks close to the campfire, their Marshmallow will begin roasting. The roasting effect does not take place when a player uses the fire pit at their house. The Marshmallow will undergo several color changes, from light orange to a dark brown glow. After about 30 seconds, the Marshmallow would then be set on fire, leaving a flaming animation as the player moves.

The player can still eat the Marshmallow normally, no matter how burnt it is, or what color it becomes.

The Marshmallow would become similar to a sparkler when it is roasted for a long time. You can flame the Marshmallow when your pet or yourself is camping. 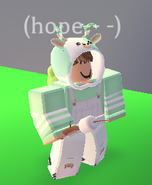 A player holding the Marshmallow. 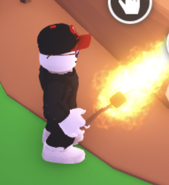 A player holding a burning Marshmallow.
Community content is available under CC-BY-SA unless otherwise noted.
Advertisement