Adopt Me! Wiki
Register
Don't have an account?
Sign In
Advertisement
in: Vehicles, Robux, Gamepass,
and 5 more

The Magical Girl Car is a legendary two-seater vehicle which was added to Adopt Me! on August 5, 2021. It can be obtained through purchasing the Ultra Car Pack for

800, or through trading with other players. The gamepass has the Wing Trunk Car and the Bubble Car along with this vehicle.

The Magical Girl Car is a supercar with primarily pink exterior, and a large cyan bow at the back. It has yellow wheel axles and a large yellow star on the hood of the car, going through the middle of the grille. It also has a dark interior. It is largely based on the Ferrari LaFerrari Aperta car. 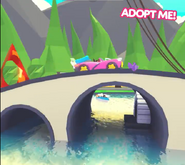 A teaser of the Magical Girl Car.