Adopt Me! Wiki
Register
Don't have an account?
Sign In
Advertisement
in: Vehicles, Gamepass, Gamepass Vehicles,
and 5 more

1250, along with the Millionaire Mansion. The Millionaire Pack's high cost makes the Luxury Car the second most expensive Robux-costing vehicle in the game, beaten only by the three carriages obtained in the Royal Carriages Gamepass. The Luxury Car is one of the few vehicles which cannot be obtained through trading.

The Luxury Car is similar to the cars that are available in the Supercars Pack, as they are all supercars that are included in a gamepass instead of being sold as standalone vehicles.

Despite being referred to as the Luxury Car in the game, the car's appearance is akin to that of a supercar. Specifically, the front of the car is somewhat reminiscent of that of the Ferrari 360 Modena, with certain styling ques from the Lamborghini Murciélago, which are more noticeable in the rear end of the vehicle and the side windows. The Luxury Car always comes in a dark red color.

The rear end of the Luxury Car.

A player driving the Luxury Car. 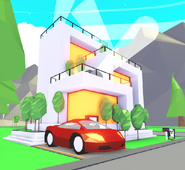 The Luxury Car in front of the Millionaire Mansion, a house that comes with this car.

The Luxury Car in a player's inventory.

A transparent image of the Luxury Car.
Community content is available under CC-BY-SA unless otherwise noted.
Advertisement